Mrs. Geef
Goofy's Wife
Sweetie Pie (signed on a she left for her husband)
Mommy (by Goofy Junior)
The little woman (by the narrator)

"George! You promised to take Junior to the beach!"

Mrs. Goofy, also known as Mrs. Geef, is the wife of Goofy and the mother of Goofy Junior in the 1950s Goofy shorts.

While her face is hidden from the viewers, her red hair is shown and her voice was heard. She appears to be slender and rather tall, with light fair skin similar to Goofy's muzzle where his whiskers extend outward. Not much is known about her, except for the fact that she was nearly as goofy as her husband and known for her undesirable driving skills.

She later appeared in the 1977 picture book "Goofy Minds the House", in which both she and Junior were redesigned to more closely resemble Goofy's design. More recently, however, she has since faded into obscurity appeared again in any modern Disney media. When the television series Goof Troop came about in 1992, the concept of Goofy's son was reworked from Goofy Junior into Max Goof, but Goofy's wife was curiously absent, with Goofy himself depicted as a single father with no mention of his wife/Max's mother ever given by the show or its related media. 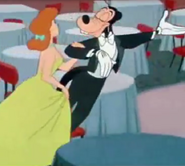 Add a photo to this gallery
Retrieved from "https://cartooncharacters.fandom.com/wiki/Mrs._Goof?oldid=8002"
Community content is available under CC-BY-SA unless otherwise noted.